Aerial tree seeding in East Africa - Some of the first things to consider. 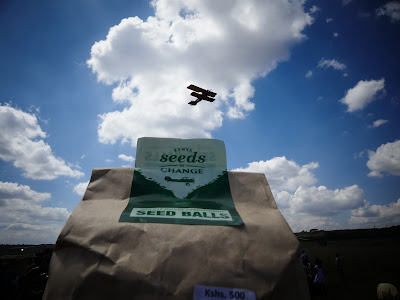 Aerial reforestation is not a full replacement for planting seedlings by traditional methods. 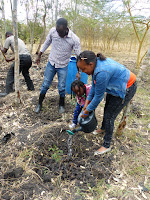 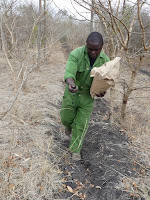 It is best considered as a potential complement to conventional planting and to natural seeding, an additional tool for foresters to use when the needs, sites, and species are appropriate.

Sowing tree seeds directly in the field is an old technique but it was little used until the development of repellents to protect seed from insects, rodents, and birds.
Today aerial seeding is already regarded as a practical reforestation technique in a few countries. There it is fully operational. More than a million hectares of well-stocked forests in the United States, Canada, Australia, and New Zealand demonstrate its success. Some of these forests have been established despite seemingly adverse conditions-for example, on steep slopes and on overburden from strip mines.
Although aerial seeding technology has been used mainly in industrialized countries in temperate areas, it would seem the techniques could be modified for use elsewhere. Whether it will prove widely applicable in the arid tropics is still unknown. The uncertainties regarding its application in new regions lie mostly in whether the native animals and plants, as well as local climatic conditions, will permit its success. Nonetheless, sufficient knowledge has been accumulated in large-scale operations in North America and Australasia to justify wide-ranging trials in developing countries.

Currently in India Aerial seeding has been taking place to the tune of 1000's of tons of seeds being dispersed in conjunction with Navy helicopters.  http://www.thehansindia.com/posts/index/Andhra-Pradesh/2016-06-11/Vizag-regains-lost-greenery/234270 and also http://www.newindianexpress.com/states/andhra_pradesh/Aerial-Seeding-Operation-Comes-to-Vizag-Navy-to-Help/2015/08/31/article3002402.ece
When sites and species are right, aerial seeding can be as successful as the more conventional process of planting seedlings. For example, pine forests have been well established in over 90 percent of the attempts in the southern United States. 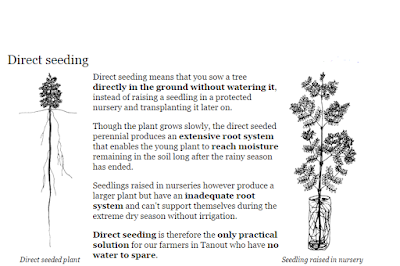 Aerial seeding is just one example of the more general process of broadcast seeding by which the seed may also be sown from the ground using mechanical spreaders or by hand. Ground-seeding methods will be preferable to aerial seeding in many situations in developing countries. In such cases, the principles and requirements are similar to those discussed here.

The advantage of the airplane is its ability to quickly seed large areas, even remote areas, when conditions for prompt germination and survival are best.

Aerial Seeding Sites
Aerial seeding is best suited to sites whose remoteness, ruggedness, inaccessibility, or sparse population make seedling planting difficult. It is particularly appropriate for "protection forests" because helicopters or planes can easily spread seed over steep slopes or remote watersheds and isolated upland areas. It seems well suited for use in areas where there may be a dearth of skilled laborers, supervisors, and funds for reforestation (Large tracts can be seeded so rapidly that supervising personnel are freed for other duties in a relatively short time. A ground crew of only three flagmen and two men to weigh and load seed are usually required). It has the potential to help increase production of tree crops for forage, food, and honey as well as wood for fuel, posts, lumber, and pulp.

Aerial seeding can often be quickly deployed because there is no wait for seedlings to grow in a nursery (which may take 3 months to 3 years). It may be used on areas denuded by clear cutting or shifting cultivation. Also, sites of catastrophes such as forest fires, hurricanes, insect devastation, battles, volcanic eruption, or landslides can be promptly reseeded with useful tree species if seed is available (sometimes a deliberate burn or other technique may be needed to remove weeds and complete preparation of the seedbed).

For example, if a wildfire bares the soil on a remote watershed and makes it vulnerable to erosion, aerial seeding can be used on the ash-strewn seedbed before weedy species overrun the site. In some cases, a mixture of seed can be applied so that herbaceous plants such as mustard, grasses, or herbaceous legumes provide a quick ground cover that protects and "nurses" the young tree seedlings and suppresses undesirable weeds.

On the other hand, rapid deployment may not be practical in some cases because the site may require preparation or the season may be wrong.
To germinate successfully, seeds usually must fall directly onto mineral soil rather than onto established vegetation or undecomposed organic matter. Where organic matter has accumulated thickly, the site must normally be burned, furrowed, or disked. The soil disturbance left after logging is often sufficient. 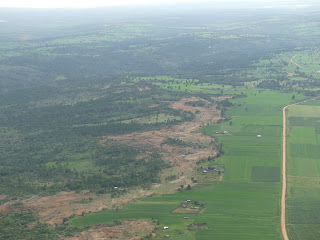 On certain sites ground preparation may be necessary. Site preparation and the seeding operation must be well coordinated to meet the biological requirements for prompt seed germination and seeding survival. Dry sites may have to be specially ridged or disked so as to optimize the rainfall that reaches the seed. Excessively wet sites may need to be ridged or drained.
The degree of slope is not critical as long as seeds find a receptive seedbed. Steep watersheds, eroding mountain slopes, bare hillsides, and spoil-banks where vegetation is sparse are often suitable for aerial seeding (however, on some steep slopes with smooth, bare soil, rain may wash the seeds away too easily for successful seeding). On steep strip-mine spoils in West Virginia and in Indonesia slopes of more than 30° (about 70 percent slope) have been successfully revegetated from the air.
Arid and savanna lands (for example, those where annual rainfall is under 500 mm) are most in need of reforestation. These are regions where aerial seeding in principle has exceptional potential. They include vast tracts of unused or poorly used land that has sparse tree cover and that is not confined to private land holdings, so it is generally accessible to aircraft. The native trees (such as species of Acacia, and other genera) in these areas are generally well adapted for survival under difficult field conditions. These are not species for timber as much as for firewood, forage, fruit, gum, erosion control, and other such uses. On dry sites, the amount of successful establishment is increased if the seed can be covered with a thin soil layer.

Species
As a prerequisite to any method of reforestation, the species selected must be adapted to the temperature, length of growing season, rainfall, humidity, photoperiod, and other environmental features of the area. Ideally, before aerial seeding takes place trial plots should be established to test those species most likely to germinate and grow successfully on the chosen sites. Even when one species has the right characteristics, it may be prudent to test seed of different provenances to find those best suited to the site.
Aerial seeding has been used mostly with conifers and eucalypts, although other species that reseed themselves successfully in a given region could also be aerially seeded with reasonable probability of success. However, in nature seed germinates over a relatively long period, and though environmental factors may be hostile at one time, they usually prove favorable at another. With broadcast seeding, only one or two applications are made, the seeds germinate together, and if timing is off, the results will be poor.

Characteristics that make a particular species appropriate for aerial seeding include:
. Small or medium-sized seed,
· Frequent and prolific seed availability;
· Ability of the seed to germinate on the soil surface;
· Fast germination and rapid seedling growth,
· Ability to withstand temperature extremes and prolonged dry periods,
· Ability to tolerate a wide range of soil conditions;
· High light tolerance;
· Seed that is easy to collect in large quantities and to store for long periods;
· Suitability of seed for handling with mechanical seeding devices; and
· Rapid development of a deep taproot by seedlings to enable them to withstand adverse
climatic conditions in the period following germination.

Species with highly palatable seeds have little prospect of success because wildlife eat the seed before it has a chance to germinate unless it is pelletized. Also, small seeds and lightweight, chaffy seeds are more likely to drift in the wind, so they are harder to target during the drop. (This can be compensated for by adding a thick coating to the seed.) Small seeds, however, fall into crevices and are then more likely to get covered with soil, thereby enhancing their chances of survival.
Aerial seeding may prove to work best with "pioneer" species, which germinate rapidly on open sites, are adapted for growth on bare or disturbed areas, and grow well in direct sunlight


Crop Spraying Aircraft.
This is the best way to do this on scale at short notice - the only company in Kenya, Farmland Aviation, who can currently do this on a large industrial scale can be found here. https://www.youtube.com/watch?v=kOWM_7kXWpg  - they can spread up to 2 tons of seedballs per hour over tens of thousands of acres. 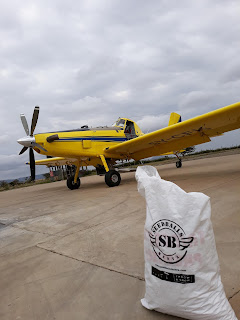 Current day low-cost UAV's that are available to the general public lack of payload capacity and range which limits them for most aerial seeding applications. Currently they seem to be best applied for use in mapping and monitoring forests. 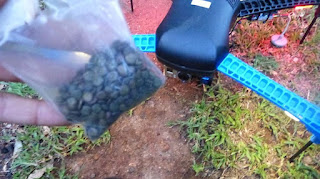 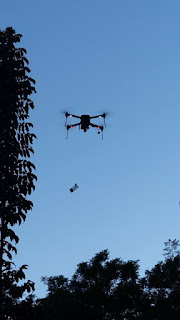 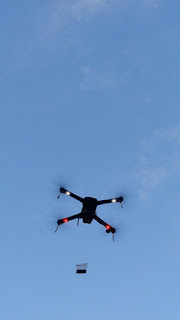 There are a few new companies who are expanding this technology rapidly:
https://www.biocarbonengineering.com/

Paragliding:
Quite possible one of the best methods we have seen so far of adding tree seed distribution to existing flight plans would definitely have to be at Borana Kenya, they sometimes throw out seeds as they take tourists on some of the most interesting adventure safari's in Kenya. 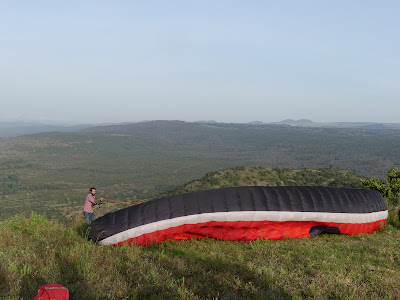 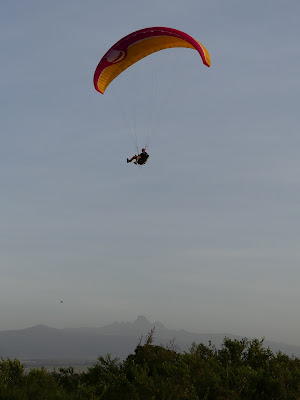